A wonderful element of living and working here in Nairobi consists in a weekly trek from Pangani (where we work) to the area of Kiamaiko (where another Missions of Center is as well as our Church Fellowship) every Wednesday for a weekly bible study with our church leaders that Justine and I help lead.

The physical journey includes a drive through Mathare on the regularly eventful Juja road (the single most anxiety-producing road in the world), which then places us in another community called Huruma (meaning ‘grace’, but does not always live up to that name) – which then allows us to enter through the back door of the Kiamaiko community after a series of speed bumps which are oddly put in place to keep out large trucks – but in so doing forces small cars to endure the full wrath of semi-round lumps of concrete. 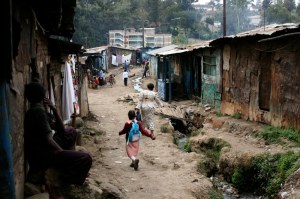 Entering and parking in our Kiamaiko Center affords us the opportunity to begin the second trek on foot which takes us down through the narrow slick and muddied pathways of the slum –with enough corridors to ensure that no ‘visitor’ will find their way out un-accompanied by a veteran.

One of the things that we’ve learned from a book The Old Ways is that walking is not a neutral act. It decisively affects the mode of one’s thinking, which is subsequently affected by particular paths and surroundings.

At this point, psychologically speaking, I might guess that anyone who witnesses such difficult living situations might generally feel a

sense of ‘heaviness’ – whether they have much of heart or not. But to further complicate the psychology of this walk, one could say that the heaviness is not purely due to the overwhelming living situations – but also the unexpected meetings of such hope in many people’s faces along the way. Don’t confuse my words here – joy is much different from happiness. It won’t do to say that anyone particularly enjoys living in a slum, but one is certainly confronted with what to do when any kind-hearted-circumstantial-defying-joy is found in such circumstances. 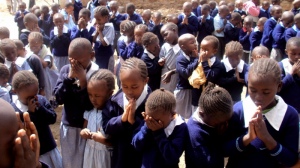 The walk continues through the alleys until reaching the bright spot of the whole community, Missions of Hope School – Kiamaiko. Here all potential heaviness evaporates as hundreds of kids (who were not previously in school or eating) and are now enjoying both – smiling and waving to you as if you are the coolest person they know (which is of course most likely false) but nice all the same.

Finally then, after just a short walk through one more alleyway and up the stairs, you come to our bible study room, a second story flight overlooking a bit of the valley.

We are now discussing the history of the Church and how these various events and lives decisively effect our understanding and living as a church-fellowship in Kiamaiko. But with church history comes the recognition (sometimes too hurriedly) of the failures of the church at various times – and having just walked through such a complex environment filled with people whose lives resemble the same constant nearness to threat and fear and hope and despair as has always been the case, we talked through why and how the church remains present in such places.

And as we’re nearing Easter, my thoughts sought for some coherence to this relationship between heart-ache and embodied hope and the church’s never-ending involvement with each. And of course! Where is there more coherence to the juxtaposition of pain/silence/despair and hope than in that dreaded last weekend of the Son of God’s life on earth?

Surely the ultimate point of this central three-day story is that it remains the absolute core and central scandal of the Christian faith; not that just anyone died nor just anyone was raised to life; but that this particular person – the Son of God – was crucified and buried as a blasphemer and rebel and convict and sinner.[1]

Perhaps it can be said then that these revelations confirms God’s presence, incarnate and incognito, within the present godless world, among its hurting and crippled, villains and victims, beside whom and as whom Jesus lives and dies – indicating that in all of this – what had previously been questioned and shrouded in doubt becomes completely clear: this is the same God who was present in and through the words and actions of Jesus and who will walk out of the Easter tomb.[2]

So if this Easter ‘Good News’ is that both scenarios of pain and joy are equally serious and true (even to the life of God) then it is in the very world of pain and heart-ache that joy is now made possible. This doesn’t mean that it is easy or trite – or that we can bring newness ourselves – but that we have a presence with us that makes such speaking possible. 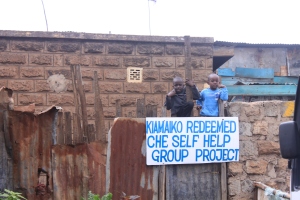 And it was in this realization that we began to speak of the Church (in the words of our church leader, Titus) as first and foremost a ‘gift’. A gift to each of us present, yes – but even more – the gift that is God’s faithful presence for the world through the church-community in order that all may hear and see that failure and shame and despair do not have the final word. Surely then, the Church exists as a community created and sustained by Easter Newness.

Surely then we can believe in the Church – not because of its ‘good record’ or ‘impressive folk’ – but because of God’s decisive faithfulness to us as shown on the cross.

Yet the church remains a wounded Body alongside other wounded bodies. It finds itself wounded because it is compiled of sinners who are ever hurting themselves and others. Yet it also finds itself as the central hope that all the wounded seek (both inside and outside the church) not because of itself – but again because of the presence of our God in this world.

Because of Holy Saturday in particular then – perhaps we can say that all of the victims of the world’s godlessness, all people bruised and crushed under the heel of others’ actions have reason on hearing Easter’s story to raise their heads in dignity and hope.

So, we as the church, find ourselves amidst the oppressed and hopeless and hurting places of the world (which is most likely everywhere), not because we think it’s some good idea, but because our God has first walked this path – and he continues to do so with us, yet always before us, meeting and receiving our wounded selves in and through our brothers and sisters in our respective communities as we also walk to do the same.

[1] Thought from Alan Lewis’ Between Cross and Resurrection, pg. 80

Ryan Hayes is a development practitioner, teacher and co-author of his first book of poems, Paralipomenon. Being born in Nairobi, Kenya and living most of his life in Africa, he has a wealth of experience and understanding into the cultural and linguistic factors of South-East Africa. Ryan is happily married to Justine with whom they have begotten three beautiful girls – Amelie, Lily and Rylee. He is a lifelong learner and devoted student of Jesus, mysticism, quantum physics and the human psyche. View more posts