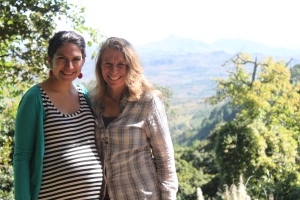 While staying on the Namikango campus I saw the sun rise and set from the porch of the guest house. I watched as the moon, stars, and planets lined up every night. I saw a world of discovery. I saw how families grow, support, and comfort one another.

I apologize to people when they ask about my travel to Malawi, they are expecting something grand, like the time I traveled to Nairobi to be at the proposal of my daughter at the base of a water fall. I can only say that it was not a vacation; it was for my daughter, son in law, and my granddaughter. It was about washing diapers, cleaning dishes, and cooking a plethora of meals to last a few weeks. It was about being there to help them settle into their new life. It was about filling in where needed. It was about stepping aside, and letting them learn to be parents.

It is about a story of how God works to bring Him the glory.

August 2013 I heard these words “Spring 2014 will be a life changing event” That is what God told me. That is exactly what I heard. How do I explain it to people? When God talks to me, I hear His voice, it is crystal clear, as if I am sitting in a room talking with you.

What is it that would be a life changing event? Good question. How about my daughter and son-in-law sharing the wonderful news that they are going to have a baby! Life changing, in so many ways, indeed!.

What can be more life changing than that? Oh, so much more. More than you can ever imagine. This is something only God can weave to bring Him the glory.

There were many conversations with Justine and Ryan, inquiring when I could come and visit them and the baby in Malawi. I continually felt that “I will be there at the end of April, beginning of May, I will be there on my birthday, and Mother’s day.

Is there a better way to celebrate these events than with the birth of a grandbaby?

Their responses back were quick and swift. That it would not be a good time, They had no idea where the baby will be born – whether they would be in Malawi, Kenya, or South Africa… There were so many unknowns, to them. But that was the path for them to discover. I knew I would be there, I just did not know how I would get there.    If my God tells me this will be, then so it shall be.

My income does not allow me to simply buy a ticket, hop on a plane, and shazam! Malawi here I am! All I am told is to be still. There was so much going on during a very short amount of time. I was rejected, disqualified, and devalued in my previous position at work, struggling to get out of a dysfunctional work situation, and struggling financially to make ends meet.

But the good news is that the Lord is closest to those who are near the flames (Dan 3:25). He sits in the furnace with us shielding us from the flames while we are suffering. Rest in Him. He will take the brunt of the heat on His back. The Lord is our Helper in this seemingly desolate island of isolation and hurt. Jesus will raise you up at the appointed time for His purposes (Jer 17:5-9)

September 2013, He will raise us up, at the appointed time for his purpose. Oh the master craftsman is amazing! Frustrated I ran, literally ran, the 3.5 miles that loop through my work place, into another supervisor’s office, shared my story, looking for a mentor to assist in the next steps. This was divine intervention. Long story short: That supervisor, the one I ran into his office, is now my supervisor.

It was April 8, 2014, I was receiving calls from Justine at work, her voice was strained. She needed more than I could give her, she needed to be comforted by Christ. Christ alone is the only one who could fill that void she was experiencing. Still, there was no open door, to buy the ticket to be with her. Once we both succumbed that a trip to Malawi was not an option. I called a dear friend, to help figure out what all this meant. She had no clue. After our conversation a still small voice said “go look at airline tickets, now..”

That is when our world was turned upside down. Airline tickets dropped significantly. Money came in unexpectedly. I bought a ticket that very night, and sent Justine and Ryan an email. It was not a question, it was a statement. I will be arriving April 23 and stay until May 17th. I will be there at the end of April beginning of May. I will be with you for the baby’s birthday, my birthday, and our mother’s day.

I was working in a new position for three weeks, when I told my supervisor I was leaving April 23rd and would be gone for three weeks and be back to work on May 19th. No I did not ask, I told him. He sat there, stared at me and said “okay. Just one thing, I need a detailed list of all you did the last three weeks.” I initiated many changes the first three weeks of this

position – and there were just nine days to prepare all he needed to know before going into an audit. During our conversation he kept repeating, “I have all power and authority to keep you from going. But, I can’t say no, you have to go.” Even when I returned back to work, He saw a life that was changed; he can’t explain what he sees. Just he knows something is different. He brings up conversations that open doors to share the Good News. He is Jewish by birth, atheist by choice, and is in awe of how he has witnessed un-explainable events. He repeats, I can’t explain it, but you have one extra-ordinary life that is unfathomable. Step one in sharing the gospel: let them reveal truth, and agree.

So I went, and did what I was to do. I was just to be. To be there when I was needed. Be there just to sit, and most importantly, be a witness. A witness to what is happening in my little girl’s life. Watching her go from an amazing young woman, to a mom. Watching a young man step up and tend to his wife. Seeing life happen, change, transform into something amazing. We send missionaries out to the world. We send our children out into unknown. But He knows what life changing events will happen on a daily basis. Events that are at times un-explainable, others that are easily explained, and still others where no explanation is needed.

So, as I sit, I am still, and cherish the time of experiencing a life changing event. That is still happening.

One thought on “Guest Blog: My Mom’s Journey to Malawi”